We’ve been a bit busy here at Science Space Wollongong over the last few months. We’ve celebrated our 30th Birthday, smashed our BIGGEST school holiday period EVER and only now are we feeling like we can stop and take a deep breath; a deep breath of our Oxygenated atmosphere.

See what I did there?

As you should all know by now, it’s the UN International year of the periodic table. We’ve been celebrating the awesomeness of the elements by highlighting one element each month. For September, we’re focusing our gaze in on Oxygen.

Oxygen: What is it?

Element number 8 is the third-most abundant element in our universe.

At room temperature, it’s a gas, but it does some seriously unexpected things when it’s cold! When it’s cooled to a balmy -182 degrees Celsius, Oxygen turns a very pale blue! Not only that, but it’s also magnetic and super flammable!

Here’s a great video from our friends at the University of Nottingham that shows you what it looks like:

Where can you find it?

Take a deep breath ———–now let it go! The air you just inhaled contains about 21% Oxygen gas. It’s literally everywhere around us. Not only that but Oxygen atoms can be found in a bunch of molecules; carbon dioxide, titanium dioxide, ozone, amino acids, proteins, carbohydrates… it’s everywhere. So much so, that planetary scientists looking for life out there in the Universe primarily look for oxygen! 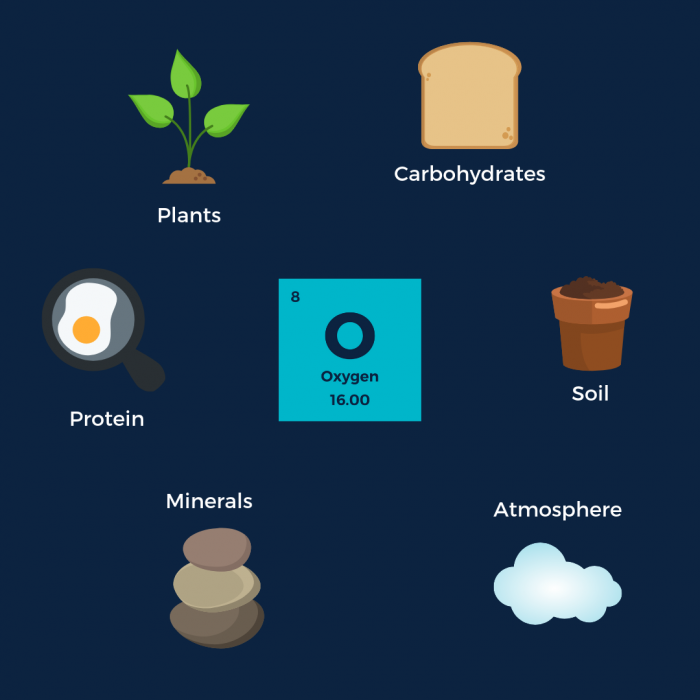 Contrary to what you might think though, oxygen isn’t entirely good for us. It definitely keeps us alive, sure, but it’s also very slowly killing us. But it’s not Oxygen’s fault…blame it on the sun!

Have you seen what happens to some metals if you leave them in water or outside for too long? They rust. This happens through a process called “oxidative stress” – Oxygen in the atmosphere slowly changes the top layers of metals and turns them into something much less structurally sound.

The same thing’s happening to us very, very slowly.

When the sun hits our skin, it can produce a bunch of really helpful things like Vitamin D. But it can also produce really unstable atoms called “free oxygen radicals”. They want to be stable so badly that they eat away at the nearest molecules. It’s like they’re super hungry for the stuff that holds your skin together. Over time, the upper layers of your skin get thinner and wrinkly.

Good news is if you protect yourself by wearing sunscreen and eating a balanced diet, you can slow this process down a bit. YASS!

On the flip side of the “oxygen-is-bad-for-you” coin is the simple fact that without it, we’d be in trouble. If we go without oxygen for even just a few minutes, we run the risk of serious brain damage. One of the main goals of CPR is actually not to bring someone back to life, it’s to maintain blood flow to the brain for as long as possible!

But some people are able to hold their breath for as much as 11 minutes without it being a problem! Check out this article by Physiology Professor Kevin Fong to see how free divers are still confusing scientists’ understanding of what the human body should be able to do!